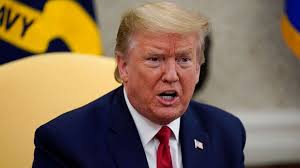 Twitter has issued a fact check of some of Donald Trump’s tweets on Tuesday, marking the first time the U.S. president’s favoured social media platform has pushed back against him spreading falsehoods.

The move, which almost immediately heightened tensions between Trump and the social media giant, came in the form of a label under two of the president’s tweets, which claimed that mail-in voter ballots are subject to extreme fraud.

The label says “Get the facts about mail-in ballots,” and then redirects users to news articles and a bulleted list refuting Trump’s claims. Shortly after Twitter issued the fact check, the president accused the company of “interfering” in the November presidential election and impinging on free speech.

“Twitter is completely stifling FREE SPEECH, and I, as President, will not allow it to happen!” he tweeted while doubling down on voter fraud claims.

It is unclear how Twitter will treat Trump’s future tweets that promote false information.

On Tuesday, Trump issued separate tweets promoting a baseless conspiracy theory about Joe Scarborough, a liberal television news host and former congressman, which were not fact-checked by Twitter.

Nick Pacilio, a Twitter spokesman, would not comment on whether the company will continue to fact-check Trump’s tweets, saying the label is used “based on what people tweet.”

BBC reported that Twitter has faced a growing backlash for giving the president a massive platform to spread false information. Trump, who has more than 80 million Twitter followers, says his use of social media is essential to bypass what he sees as a biased media establishment.

“There are many reasons we pulled all our advertising from Twitter months ago, and clear political bias is one of them,” Parscale added.

The president has increasingly claimed that mail-in ballots are subject to high rates of fraud at a time when some states are increasing access to postal voting to protect public health ahead of the November presidential elections.

Election law experts say there is little evidence of increased fraud in mail-in ballots, as general voter fraud remains extremely low. Republicans have long pushed to tighten the process for voter registration as Democrats have sought to expand voter accessibility. Some studies show increased voter turnout is a boon for Democratic candidates.

In June of last year, Twitter said that it would mark tweets deemed to be in the public interest that violate its policies on such things as abusive behaviour and public safety.