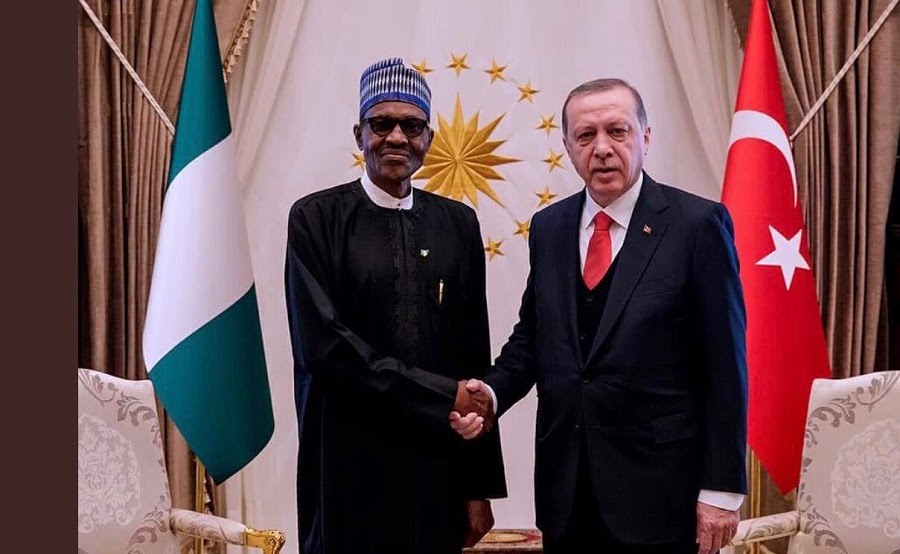 The Turkish President, Recep Tayyip Erdogan, while visiting Nigeria has raised the alarm over presence of a terror group hibernating in Nigeria, Fetullah Terrorist Organisation (FETO), as both nations, yesterday, signed eight critical bilateral agreements on energy, defence and hydrocarbon, among others.

Erdogan, who is on a two-day official visit to Nigeria, made the revelation at the Presidential Villa, Abuja, where he met with President Muhammadu Buhari.

Specifically, FETO, an atypical, armed terror group, exploiting religious sentiments of the people, was said to be behind the failed 2016 coup attempt in Turkey.

Recall that Turkey had accused the coup leaders of being linked to the Gulen Movement, led by Fethullah Gulen, reported to have about 17 schools in Nigeria.

Addressing a joint press conference during the visit, President Erdogan, accompanied by the First Lady, Mrs. Emine Erdogan, solicited cooperation from Nigeria as his country battle terrorism, stressing that his country has been battling terrorism for many years.

“The perpetrator of the heinous failed coup of July 15, FETO, is still illegally active in Nigeria, and we are continuously sharing our intelligence with the Nigerian interlocutors and authorities. I hope and pray that our Nigerian brothers will forge a closer solidarity in this field with us, the Republic of Turkey. I hope and pray that our visit will yield the most auspicious results and I would like to thank my distinguished brother, President Buhari, for being such a gracious host for me and for my delegation.”

President Erdogan, who departs for Togo today, said Turkey was keenly following developments in Nigeria and expressed the readiness of his country to share capabilities with the West African nation to fight terrorism to a halt.

Commiserating with Nigeria on the attack in Goronyo Council of Sokoto State, which claimed over 40 lives, the Turkish leader pledged that his country would further cooperate with Nigeria on counter-terrorism as well as in the fields of military, defence and security.

On the economic front, he stressed that Turkey was determined to improve relations with Nigeria to ‘’higher levels on all fields,’’ revealing his country’s readiness to expend about $5 billion dollars to increase the trade volume between the two countries.

“We shall be celebrating the 60th anniversary of the establishment of diplomatic relations between our two nations, and Nigeria hosts one of the oldest diplomatic missions of the Republic of Turkey on the African continent. Nigeria is one of the outstanding members of international organisations such as the G-8, Organisation of Islamic Cooperation (OIC), ECOWAS and the African Union.

“We should appreciate the tremendous efforts of Nigeria with eventual goal of bringing peace, stability, and economic development to the entire African continent. Nigeria holds the manufacturing position of the entire continent, and trade volume between the two nations reached $2 billion last year. Thus, Nigeria became our most outstanding and biggest trade partner in sub-Saharan Africa.”

On his part, President Buhari heaped praises on President Erdogan for opening his country’s borders to accommodate millions of refugees in dire need of humanitarian support, saying that his Turkish counterpart has set an example to the rest of the world on how to treat refugees.

’I commend Your Excellency for your leadership and generosity in receiving and accommodating four million refugees fleeing conflict areas, particularly in Iraq, Syria and Afghanistan.”

On the accomplishments from the visit, President Buhari said: “We held very useful discussions on a number of bilateral issues, aimed at strengthening this cordial relationship between Nigeria and Turkey. The key issues we touched on included a series of Bilateral Agreements and Memoranda of Understanding that had been finalised.

‘’As a positive outcome, eight major Agreements/MoUs on a number of the key sectors including energy, defence, industry, mining and hydrocarbons among others were signed today (Wednesday). We have agreed that implementation is to commence immediately.

‘’In the course of our discussions, we also reviewed the travel ban list based on the revised COVID-19 protocols and removed Turkey from Nigeria’s travel ban list.’’

The 2016 coup in Turkey, largely blamed on the exiled and acclaimed Muslim scholar, Fetullah Gulen, struck the nation like a tremor, when about 10,000 soldiers staged attacks against government institutions, and after hours of action, 251 people were killed and over 2,000 were injured, many of who confronted the rampaging coup plotters.

The coup was eventually quashed but the scar was deep and indelible. The Turkish Government has since embarked on extensive purges. In the last five years, over 10,000 education staff were suspended and the licenses of over 20,000 teachers working at private institutions were revoked for alleged links to Gülen even though the U.S.-based cleric has denied any involvement in the coup and condemned it. Turkey has arrested nearly 40,000 people and dismissed some 110,000 public servants since the coup attempt.

The Turkish Ambassador to Nigeria, Hidayet Bayraktar, in his remarks in July during the ceremony to mark the fifth anniversary of the coup in Abuja, in the presence of Nigeria’s Minister of Federal Capital Territory, Mohammed Musa Bello and members of the Diplomatic Corps, said: “The perpetrators of the hideous undertaking actually consisted of the disciples of Fetullah Gulen, whose aim is to take control of the Turkish State to reinstitute it according to their perverted religious ethos.”

He warned Nigeria and other countries where Gulen may have opened institutions and businesses to be wary of the Gulen Movement, describing FETO “as a mafia-like cultish terror group, with clandestine political aims.”

He added that FETO “is a threat not only to Turkey but also to all countries where they still run their operations. Their actions in Turkey should be considered as a wake-up call for other countries.”

The warning from the Turkish envoy in the face of lingering war against Boko Haram insurgents and bandits was reechoed by the Turkish President yesterday.