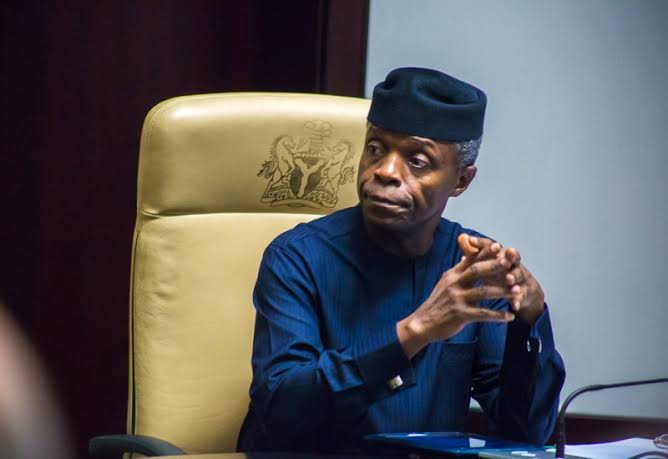 Vice President Yemi Osinbajo yesterday distanced himself from the ownership of the high-rise building, which collapsed last Monday on Gerrard Road, Ikoyi, Lagos State, killing about 38 people so far while many others were injured.

This was even as the founder of Elizade Motors and Elizade University, Chief Michael Ade-Ojo, has said that he didn’t sell the land on which the collapsed Ikoyi building stood to the Vice President.

Osinbajo, in a statement, said he does not own the land where the collapsed building was being constructed. He vowed to initiate legal actions against the media organisation that linked him with the property, alleging that the report was a hatchet job viciously couched for political gains.

The vice president, who expressed sadness over the loss of lives in the incident, said he had previously declared his assets as required by the constitution and therefore has no interest in the land.

The statement signed by his Senior Special Assistant on Media and Publicity, Laolu Akande, read: “Vice President Yemi Osinbajo is saddened by the events that occurred in Lagos on Monday, November 1, 2021, where a high-rise building under construction on Gerrard Road, Ikoyi, collapsed. He condoles with the families and relatives of all those who have died, were injured or affected in the collapse. Prof. Osinbajo considers this painful loss of lives a horrible tragedy.

“Also, the attention of the vice president has been drawn to an obviously sponsored falsehood regarding the recently collapsed building published by Sahara Reporters on November 4, 2021, to the effect that: The vice president owns the land upon which the collapsed building in Ikoyi stood; that the said land was sold to him by Chief Michael Ade-Ojo, Chairman of Elizade Motors; and that the vice president, at some point, intervened with the regulatory authorities in Lagos State to unseal the said property.

“Let it be made absolutely clear that Prof. Yemi Osinbajo does not own and has never owned the said land.

“He has also never been involved, in any shape or form, in the development of this or any other land since he became vice president.

“All property and assets owned by the vice president have been publicly declared.

“Also, the vice president has never spoken to the Governor of Lagos State or any other official of the state government regarding the unsealing of the said building on Gerrard Road, Ikoyi, which subsequently collapsed.

He has, indeed, never acted to influence any other regulatory action on the collapsed building, or any other building for that matter, in Lagos State.

“The vice president restates categorically that he has no interest whatsoever, and has never had any interest, either legally or beneficially, in the land, the building or development.

“The wickedness and viciousness of a lie that seeks to utilise a tragedy where so many people have lost their lives, even as rescue efforts are ongoing, and in wanton disregard to the feelings and untold grief of their loved ones for political gain, reveals a dangerous desperation, as well as the heartlessness of the perpetrators of such despicable lies.”

The statement added: “Sahara Reporters were undoubtedly well rewarded for their criminal and inhumane conduct. Typical of a hatchet job and deliberate irresponsible journalism, the publication was not signed by anyone. The vice president has referred this disgraceful publication to his lawyers for prompt legal action.”

Ade-Ojo’s statement read: “It has come to my attention that a publication by the online news website, Sahara Reporters is in circulation, claiming that I owned the land on which the high-rise building in Ikoyi that collapsed earlier this week was built.

“Both claims are outright falsehoods. I hereby state that I do not own and never held title to the said property.

“In addition, I did not sell any property to the vice president at any time whatsoever.

“To be clear, I own a property next to the said building, which I have not sold and do not intend to sell to anyone.”