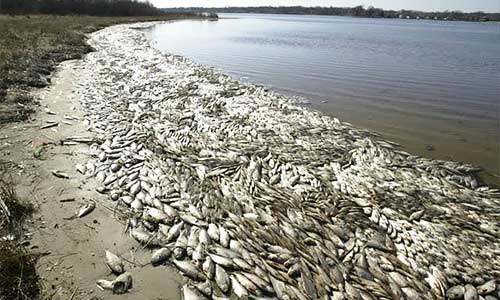 Toxics discharged into the ocean were responsible for the death of multitude deaths of croaker fish washed ashore the Atlantic Ocean, the National Oil Spills Detection and Response Agency (NOSDRA) has disclosed.

The banks of the ocean at Delta, Rivers and Bayelsa states were recently filled with dead croaker fish creating uproar in the Niger Delta region and forcing the regulatory agency to launch an investigation into the cause of the development.

But the agency said its findings revealed that the toxics could have emanated from land observing that wastes from domestic and industrial sources were usually emptied into the water.

NOSDRA’s Director-General, Idris Musa, in a statement insisted the toxicity found in the dead fishes and water samples was caused by pollution from heavy metals from industrial and domestic wastes.

He said that relevant government agencies with mandates on the marine environment collaborated with NOSDRA to undertake the study listing the agencies involved as the Nigerian Maritime Administration and Safety Agency (NIMASA), Nigerian Institute of Oceanography and Marine Research (NIOMR), National Environmental Standards and Regulations Enforcement Agency (NESREA).

He said the Federal Institute for Fisheries Research was also among the establishments enlisted in the efforts to unravel the likely causes of the massive death of the fishes.

Musa said the results of the tests confirmed NOSDRA’s preliminary findings that the death of the fishes were not linked to oil leakages as the levels of hydrocarbon in the samples tested were within regulatory limits.

According to him: “The results of the laboratory tests were perused, and we make explanation on the parameters of concerns that were analysed for the purpose of clarity and understanding. As earlier mentioned, the findings did not show hydrocarbons (Oil) as the possible cause of the death of the fishes.

“The values of the parameters in sediments were substantially within regulatory limits. The values of Chromium and copper in the sampled dead fishes’ tissue were slightly higher than the European Union ( EU ) Standards limits”.

Musa said having ruled out oil pollution as cause for the dead fishes, the plausible causes could partially be attributable to other human related pollution activities which were based on land.

He said: “In this case, while it is commonly observed that most industrial and domestic wastes which contain heavy metals such as cadmium, iron, zinc, copper found their ways into drainages and onward transfer to the water bodies.

“Their deleterious impact may be negative to aquatic species, other mammals and human beings. The main sources of these are batteries, galvanised pipes, fertilisers, sewage sludge and plastics. Such may be the case in the analyses of dead fishes found at the coastline in Delta and Bayelsa where chromium was found in fish tissue.

“Copper was also found in the fish tissue sampled in Delta State but not in those of Bayelsa and Rivers State. Furthermore, a sudden release of heavy metals is not likely to kill fishes except those trapped at the point of release because, cadmium in particular is highly toxic.

“Long term accumulation (chronic) rather than short term (acute) heavy metals could cause the death of fishes. It is also curious that a specific species of fish is allegedly involved in the circumstance under consideration”.