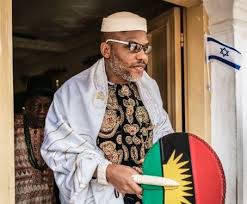 The leader of Indigenous People of Biafra (IPOB), Nnamdi Kanu, on Thursday said he would sue the Federal Government and Inspector-General of Police for illegal arrest of the IPOB members in Delta State.

Police in the state arrested about 10 members of the organisation on Wednesday allegedly in possession of 15 AK47 rifles said to have been snatched from policemen. Reacting in a broadcast, Kanu said the Commissioner of police arrested innocent people who did not commit any crime.

“They are holding innocent people because IPOB does not have a camp in Delta State nor any of its members in possession of AK-47,” he stated.
According to him, the camps the police discovered belonged to herdsmen who he said had taken over parts of Delta State.

The Nation reported that he condemned the arrest and wondered why the police should parade people yet to be found guilty by the court.

“I don’t condole any crime and criminality in IPOB. The AK47 are not our own. They are what the Fulani herdsmen are carrying about.

“We are none violence organisation seeking for freedom legitimately. So what do we need gun for when coronavirus is there ravaging Aso Rock. We are going to challenge the arrest in the court tomorrow.

He added: ” The whole drama is just to pave way for Fulani herdsmen invasion and conquest of Delta State.

“When the herdsmen were attacking, killing, raping and kidnapping people in the Southwest, Southeast and South South who arrested and paraded them? This tells the whole world what IPOB is passing through in the face of our land. “