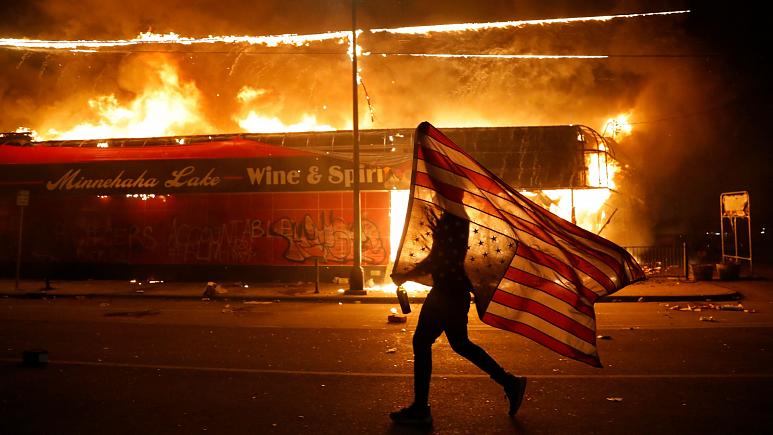 Protests over the killing of an unarmed black man by police in the US city of Minneapolis have grown increasingly violent, with the National Guard being deployed and the president threatening to have looters shot.

George Floyd was killed on Tuesday, after having been handcuffed by police. Widely shared video of the incident shows a white police officer kneeling on Floyd’s neck, with the handcuffed victim telling the police officer he cannot breath. Shortly afterwards he is shown to be motionless.

His death has sparked widespread protests in the city and surrounding areas. A police HQ in the city, a focal point of some of the protests, was set alight on Thursday night after being abandoned by the police. The National Guard said more than 500 soldiers have been deployed across the area.

Thousands of protesters have been demonstrating peacefully, calling for justice. However a number of fires have been started in buildings nearby the police HQ, and a man was shot dead on Wednesday, possibly by the owner of a pawn shop, police said.

Protests have also spread to other US cities. In New York City, protesters defied New York’s coronavirus prohibition on public gatherings, clashing with police, while demonstrators blocked traffic in downtown Denver. A day earlier, demonstrators had taken to the streets in Los Angeles and Memphis.

The president Donald Trump took to Twitter to issue a threat: “when the looting starts, the shooting starts”.

Protests over the killing of an unarmed black man by police in the US city of Minneapolis have grown increasingly violent, with the National Guard being deployed and the president threatening to have looters shot.

Police say George Floyd was detained on Monday because he matched the description of someone who tried to pay with a counterfeit bill at a convenience store, and the 46-year-old resisted arrest.

The FBI is conducting a “robust criminal investigation” into Floyd’s death. The officer who was kneeling on his neck, Derek Chauvin, has been fired along with three others who were involved in the arrest. The mayor has called for Chauvin to be criminally charged.