Gunshots in Presidential Villa, Aisha Calls for the Release of Her Aides 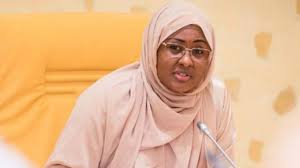 I what was regarded as ‘security breach’ occurred at the precincts of the Presidential Villa, State House, Abuja on Thursday night, when the First Lady’s Aide-de-camp, Usman Shugaba, attempted to force President Muhammadu Buhari’s Special Assistant, Sabiu Yusuf, into self -isolation over COVID-19 fears.

ThisDay reported that trouble started when Sabiu, President Buhari’s nephew, returned to his residence at the precincts of the Presidential Villa, just outside the Pilot gate, after a trip to Lagos where he had gone to meet his wife who had just delivered a new baby.

Citing COVID-19 protocols, sources said, the First Lady Aisha Buhari and three of her children, Zahra, Halima and Yusuf, accompanied by some of her security aides led by the Aide-de-Camp, on Thursday night went to the residence of Sabiu located just outside the Presidential Villa to demand that he should self-isolate for 14 days, so as not to endanger the first family.

The encounter was said to have degenerated into a heated argument as Sabiu insisted he was not the only aide to travel to Lagos saying that the new Chief of Staff, Prof. Ibrahim Gambari, is in Lagos every weekend till he settles in Abuja, and wondered why the double standard requiring his self isolation for visiting his own wife who just delivered a new baby.

Sabiu, also known as ‘Tunde’ (believed to have been named after Late Gen. Tunde Idiagbon, Buhari’s deputy during his military regime in the 1980s), was however said to have returned home after the arguments.

As he got home, the first lady in company of her children raided the premises using abusive words, presidential sources who witnessed the incident said, leading to the escape of Sabiu after gunshots were fired by the First Lady’s ADC in an attempt to apprehend the President’s aide, who had to breach walls to run for his life and escape to the nearby residence of President Buhari’s cousin, Mamman Daura, where he spent the night.

It was gathered that the Inspector General of Police, Mohammed Adamu, after receiving security report on the incident on Friday where gunshots were fired in the precincts of the Presidential Villa, ordered the arrest of the Aide-de-camp to the first lady and all the security aides that accompanied her to Sabiu’s residence.

Their arrest, it was learnt, was premised on the fact that firing of gunshots, no matter the provocation in the presidency, and around the president was a major ‘security breach’.

The incident was however brought into the open by the First Lady on Friday night when she called on IGP Adamu to release her aides from detention.

In tweets from her verified twitter handle @aishambuhari on Friday night, the first lady wrote: “That Covid-19 is real and still very much around in our nation is not in doubt. Consequently, I call on all relevant Government Agencies to enforce the Quarantine Act signed by Mr. President and ensure no one is found violating this law and the NCDC guidelines especially on interstate travel without the necessary exemptions for movement of essentials. Anyone who does that should at the very least be made to under go a 14 days mandatory isolation no matter who the person is, no one should be above the law and the Police command will do well to remember that.

“Finally, I call on the IGP to release my assigned Staff who are still in the custody of the Police in order to avoid putting their lives in danger or exposure to Covid-19 while in their custody.”

She however did not disclose the identities of her aides detained neither did she say when or why they were detained.

Sources in the State House stated that following the death of Mallam Abba Kyari, the President’s former chief of Staff who died as a result of COVID-19 complications, the first lady had been moving to expand her influence within the State House but believed that some of her husband’s relatives, including Sabiu, were blocking her from achieving that objective.

She however seized the opportunity provided by Sabiu’s visit to Lagos to attempt to clip his wings by demanding that he should self-isolate so as not to endanger the first family.