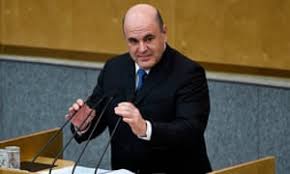 The Russian Prime Minister Mikhail Mishustin says he will self-isolate after testing positive for the coronavirus.

“I have just learned that the test on the coronavirus I took was positive,” Mishustin said in a video call with President Vladimir Putin on April 30, adding that he will self-isolate to protect other cabinet members.

Mishustin suggested that First Deputy Prime Minister Andrei Belousov should temporarily perform his duties, but the prime minister insisted he would remain in touch on key issues.

Putin wished Mishustin a speedy recovery and expressed hope that he would continue taking part in drafting policies to shore up the Russian economy, which has been hard hit by the pandemic.

The 54-year-old was named prime minister in January.

His positive test came on the same day that Russia recorded a record 7,099 new virus cases, taking the total number of confirmed infections above 106,000.

The mayor of Moscow, which accounts for half of Russia’s reported infections, said he does not think the Russian capital is close to overcoming the spread of the disease.

“We’re not even at the midpoint, in my opinion; at best we have passed a quarter of this way,” Mayor Sergei Sobyanin said.

Reuters reported that Putin and many other senior officials have been working remotely in recent weeks in an effort to shield themselves from the outbreak.