Covid-19: It is Unethical to Reject Patients, They Must be Attended to – Fed Minister of Health to Doctors 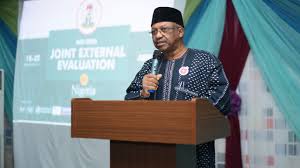 The Federal Government on Thursday threatened to withdraw licenses of medical doctors who deliberately reject and turn back patients from their hospital without attending to them or offering necessary advice on what to do.

Describing it as unethical and unacceptable, the Minister of Health, Dr Osagie Ehanire, while speaking at the daily briefing of the Presidential Task Force on COVID-19, said, doctors who engage in such unprofessional conduct will be reported to the Nigeria Medical, and Dental Council, and if found guilty would have their licenses withdrawn.

The minister gave this position, even as he raised concern over the rise in fatality rates and cases of COVID-19, saying, “although numbers are only creeping up compared to other countries and case fatality rate hovers around 3%, we are concerned and at high alert.”

Dr Ehanire advised anyone who is rejected at any hospital or medical facility to write and complain to the board of such hospital, the Federal Ministry of Health, or the state ministry of health in case of state hospitals.

The minister said: “It is unethical to reject patients who come to the hospital for treatment. I have said here repeatedly that every person who comes to the hospital must be seen and attended to and at least, be given advice on what to do.

“So, we do receive cases or complaints like that and we have always followed them up and in cases where it is proven that there is an infringement on the duties of the Doctor it is referred to the Medical and Dental Council of Nigeria and it is well known that they have gone to as far as withdrawing licenses of doctors for cases of very serious medical misbehaviour.”

While also expressing concerns over the fatality rate, he said: “Yesterday, we had 409 new confirmed cases of COVID-19 which increased the total number of cases to 13,873. We have successfully treated and discharged 4,351 persons and unfortunately lost 382 Nigerians to the disease.

“Although numbers are only creeping up compared to other countries and case fatality rate hovers around 3%, we are concerned and at high alert. We have no room for complacency or over-confidence, and need to be ready for any sudden shift in fortune.”

The minister figures pointed out thatn61 per cent of COVID-19 patients in the country were Asymptomatic, while 39 per cent were symptomatic.

According to him, “In Nigeria, the proportion of confirmed cases that are symptomatic compared to asymptomatic is 39% and 61% respectively, which means that if 10 persons are able to infect you with COVID19, four of them will look very well indeed. Another three or four will have mild symptoms that can be trivialized, even by healthcare workers, which may explain the initial relatively high rate of infection among them.

“The cheapest and easiest way to protect oneself is with a mask; in this case, a cloth mask will do. This is why the Federal Ministry of Health constantly urges citizens to adhere strictly to wearing a mask when outside their homes and observe other non-pharmaceutical measures, especially now that confirmed COVID-19 cases in Nigeria continues to rise, which gradually raises the risk.”

On the issue of resident doctors who have threatened to embark on strike, Ehanire explained that the Federal Ministry of Labour and Employment, the Federal Ministry of Health and the Speaker of the House of Representatives; have been engaging the National Association of Resident Doctors (NARD) to address issues raised by the young doctors.

The minister said: “We also had a conversation with the Ministry of Finance, Agencies and health-related associations, which addressed issues of welfare and allowances to frontline health workers.

“Complaints on availability of PPE’s have been addressed with the supply of materials to States, and separately to Federal Medical Centers. The disengaged resident doctors at the University of Jos Teaching hospital were recalled by the Board of Governors. I am confident that resident doctors will show understanding and reciprocate the government’s efforts on the assurance that grievances shall be addressed.”

He commended the Speaker, House of Representatives, Hon. Femi Gbajabiamila, for his intervention and the Minister of Labour, Sen. Chris Ngige for their commitment to ensuring industrial harmony in the Health Sector.