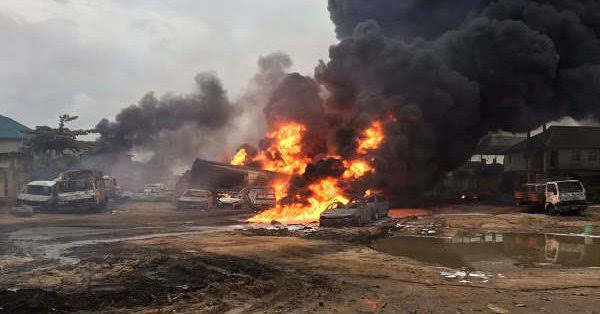 Following the explosion that happened in Abule-Ado on Sunday, residents and victims have been counting their losses. As at 10:00 pm Sunday night 15 March 2020, the death toll is yet to be ascertained but among the dead was Reverend Herietta Alokha, the Principal of Bethlehem Girls College, Abule-Ado, Lagos who was said to have died trying to rescue her pupils from the inferno. The explosion has left many dead and several injured. More than One Hundred properties have been damaged or totally lost.

Officers of the NNPC, the Police, the Federal and Lagos State Fire Service, NSCDC, LASEMA and other relevant institutions are on all ground to contain the inferno and to continue with rescue operations in the affected areas. The initial scare that the explosion could be a terrorist or insurgents attack had already been ruled out by the police. Notwithstanding, that the Police had ruled out a terrorist attack, the police representative spoke to the press and stated that the Police bomb squad is on its way to conduct its investigation.

With the mass victims coming from the incident, the Navy Town Hospital in the Ojo area of Lagos already has its hands full as its facilities have been stretched, the Flag Officer Commanding, Western Naval Command stated.

Rescue operations still continues as hospitals take in the victims of the explosion.